I couldn't refuse an offer the Weather Gods made on the Wednesday evening while I was at a wine tasting party at the Stokelj family vineyard, in Slovenia, just a few minutes drive away from the Pipistrel factory. ​​​​

Spela was entertaining us with her deep knowledge of how her parents and siblings made the various wines layed out before on the long table, next to the warm wood fire in their tasting lounge.

The conversation was very technical, no not about aviation but all about grapes...... and how best to drink them. Between sips of excellent tasting beverages, we were nibbling through the homemade several varieties of salami, prosciutto and cheese. Some of the group nipped outside to light up tobacco products. I went outdoors to keep company and saw the bright starlit sky with nill wind.

I looked at my mobile phone and checked Windy. The weather gods had parted two low-pressure systems wide enough for me to sneak through from Slovenia to UK in the morning. There was a brand new Pipistrel waiting to be taken home from the factory. Andy, the chap who completes delivery documentation at the company was standing shivering, next to me, with his rolled up fag.

"Hey Andy, what do you think? " I asked, "can you check and complete the paperwork and deliver me the new aircraft tomorrow early morning?"

Yes, those fellows start at 0700 and finish at 1500 in hard working Slovenia.

The Virus was ready to go with full tanks and paperwork in order the next morning. A quick walk around the aircraft was sufficient for a preflight check in the immaculately clean factory. I was already late at 0800..

The factory production test flights were in progress since 0700 and the two factory test pilots, Nick and Dennis were already on their second test flights with brand new aircraft.

My assessment was that I would gain one hour of daylight flying westwards and given the two low-pressure systems sitting on either side of my route, there would not be much wind against me. But there was the risk of being caught out with some rain and low clouds over the Vosges mountains and in the Ardennes, familiar French territory that I have flown over and around many times in the past.

I decided to warm up the aircraft whilst taxiing to the far threshold of the runway. I was given the departure briefing by the factory test pilot and the not so damp grass taxiway beckoned. A quick circuit and a low pass to test all the systems worked and I was on my way northwest through the Venetian Civil Airspace in to some military training areas active in the Italian Alps.

The day before I had driven along the banks of the River Vipava, where some of the best vineyards are to be found. The Vipava was brimming upto its banks and overflowing in many areas, filling in the farms and pastures. The River Sochi was also flooding and of course the news was San Marco Square, in not so far away Venice, was flooded with a combination of the high tide, continuous heavy rains and a full moon.

A steady climb in the clear morning sky with light winds was very pleasing and effortless. I was enjoying flying alone after a long and busy year with students on tour and train courses, formation flying with friends and local training flights. The foothills soon became the high Alps, with a distinct separation between the treelike and the snow line. Thin veils of mist lay over the valleys, whilst the sun shone brightly on the vertical granite of the Dolomites, carved up by the ancient rivers now swollen with seasonal heavy rains. The River Tagliamento is said to be in a very good hydromorphological state. (I had to look up this big word, which roughly means the river is not much affected by man's interventions.) From the thinning air, I could see little sign of human interaction with the Tagliamento between Udine in the Italian plains and the massive 10,000 feet high peak of “Croda dei Toni” on the Italian/Austrian Border.

The valleys and peaks of the Alps make their own local weather conditions and despite light winds forecast, I was warily waiting for the sudden strong turbulences that are created by the junctions of the wrinkly and steep mountains. The peaks were still above my level as I continued to climb steadily avoiding the active military areas on the Italian Alps. Changing my route towards the west on a more direct track towards home and the Bolzano Pass I could see the "Parco Nazionale delle Dolomiti" in Italy morph into "Naturpark Drei Zinnen" in Austria.

The voices of Padova Control started to crackle and fade into the distance behind me to the east and I changed radio frequency to listen into Innsbruck Control. By coincidence it was the same controller with whom my friend Dom and I had had a “non-standard phraseology exchange” in colloquial Italian during our summer tour with 3 aircraft over the Inn Valley. Both of us recognised each other’s unique speech pattern and a professional greeting was exchanged along with instruction issued to maintain FL110 to avoid intercepting a CAT descending over my head. My Indian accent and her Austrian accent were perfectly compatible with the CAT with the German accent. No chance of mis-interpretation at all.

Skimming over the 11000 foot high peaks, I was barely a couple of hundred feet over the soft snow hiding the granite teeth of the peaks, anxiously looking for signs of wind swept snow which would signal strong winds... ah there is the wisp, quick avoiding action, stay upwind of the snow drift and avoid the wind shear. The gps indicated 48 knots wind speed in a few seconds and I was glad to be strapped tightly in the cockpit with no loose objects except my snickers bar, which made an inadvertent leap into my right hand. My cricket team captain would have applauded the quick reactions after 40 years away from the slips.

The short sharp jolt kept me alert as I flew directly toward the Innsbruck airport, familiar with and anticipating more turbulence, but none were discovered. The Inn Valley spreads far and open to the east and to the west it narrows down quite a lot. My plan to go west on a direct track towards Strasbourg in France did not look so attractive due to the strato-cumulus clouds just covering the peaks so I continued due north of Innsbruck into Germany and stayed under the thin, milky overcast. As much as the Alps rise dramatically from the Italian plains, they drop off vertically in the north into the Bavarian Alps in Germany.

This was the first time I understood why a Forest might be called Black. The dense trees in Bavaria look ever so black, given a covering of snow and ice on the surrounding mountains and plains. Passing north abeam of Castle Neuschwanstein (of Chitty Chitty Bang Bang fame) I made a cruise descent towards Strasbourg, passing over Memmingen towards the Schwarzwald or the Black Forest, which did not look black, but dark green over the gently rolling hills running north south and falling west into the mighty Rhine Valley, separating Germany and France as friendly neighbours over a hedge and a stream. The ATC were helpful as ever and there was no other traffic to affect me, other than some military chaps flying circuits underneath me near Laupheim. I avoided some of the large restricted areas shown on NotAm and instructed by ATC.

The Baden Baden CTR came into invisible proximity and the voice in my ears took on a French accent with a different squawk. I was guided as I requested to be let down gently into friendly Haguenau airfield for a quick refuel and comfort stop. Actually this was the fastest I have ever been refuelled in France, less than 10 minutes after landing I had paid for the fuel and was nourished by the snickers bar and wheels were off the tarmac 16 minutes after landing.

Now the weather to the west was deteriorating, as forecast, with the rain in the occluded front lay right across my path. Staying at a safe height over the ground, talking to various controllers, who were as helpful as they could be on a slow Thursday afternoon due nill VFR traffic. I managed to negotiate the drizzle with a bit of English scud running technique skimming over the Vosges mountains. Still dodging the widespread but light drizzle of a typical occluded front, I continued generally westwards following the valleys until I came in sight of Sedan. This is in the Ardennes region where many armies have fought and died during the two great wars and earlier. I stayed along the French side of the Belgian border dodging clouds, sometimes above the low mist and other times below the cumulus and drizzle. But sunshine beckoned west with Le Touquet weather showing good conditions across La Manche.

I had enough fuel in the Virus to make it direct to Damyns Hall but I had to land at LFAT for a quick customs check from Schengen Area into the UK. There was no one at the desk. I found the entire team tucked away in an office on a training day. But they were happy to take my landing fee and the customs lady was ever so polite and inspected my passport with great scrutiny in not more than 3 seconds. I was up in the air in less than 15 minutes from Le Touquet.

The cliffs of Beachy Head were visible almost as soon as I left the French coast. But heavy showers with embedded CB were in the Lydd area. I could see the heavy rain in the west over England. Staying at 1800 feet over the English Channel, I negotiated my way through and coasted over Folkstone to follow the railway line. More dodging showers and in a few minutes I was on final approach at Damyns Hall.

The total flight time was 6 hours from Pipistrel factory to Damyns Hall, a distance of 680 nm. 85 litres of petrol was consumed. Some amazing views over the Alps were enjoyed and some of my skills updated with practice of dodging rain and terrain (terror and rain?) through France. I had breakfast in Slovenia and was home for the best biryani from “Mumbai Central” for early dinner the same day. 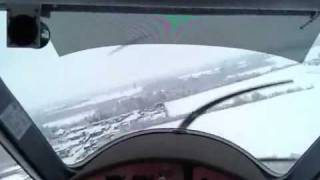